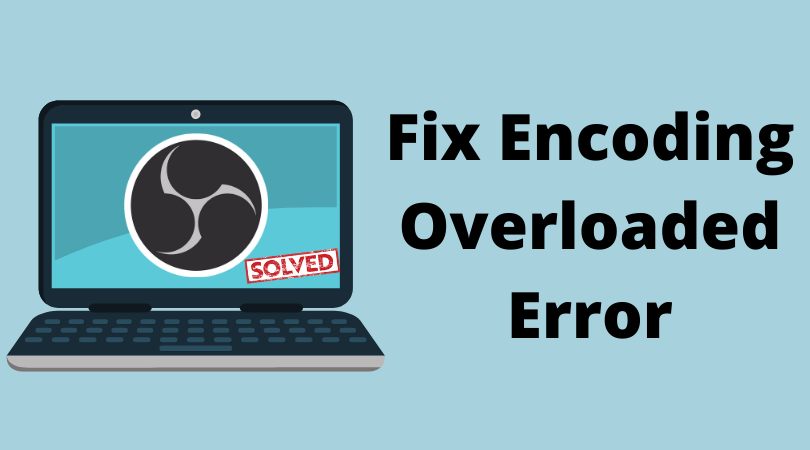 OBS is probably the most favored software used by thousands of people in the streaming industry. Most of the streamers on various platforms such as YouTube, Twitch, etc use OBS for streaming. Out of all the other streaming software, OBS seems to be most sophisticated for game recordings and for streaming over multiple platforms. It’s simply the best streaming software available on the internet, considering the extreme customization and presets it offers to users. Another good thing with OBS is that you can use on your Windows and MacOS as well for streaming and recording your gameplay.

It’s actually quite amazing how deep customization settings are available in OBS compared to any other streaming software available on the internet. However, it’s likely for new users of OBS to run into errors, which is quite common with any highly customizable programs. You might run into errors such as “Encoding Overloaded” if you don’t balance the settings properly or mess up the default settings.

What Is Encoding Overloaded Error in OBS?

The steaming software, OBS, offers tons of customization and settings which might overwhelm users, especially if you’re new to it. Therefore, it’s recommended to learn and understand all the settings provided in OBS before you start playing with them. One of the most common issues most of the OBS users see on their screens is “Encoding Overloaded” while streaming.

The error shows up all the way at the bottom of the program interface whenever you start streaming on any platform such as YouTube or Twitch. You’ll most likely see this error if you’re using a low-end PC or if you have set the video settings to the maximum. What generally happens is that your CPU will start taking more load than it can handle and will eventually overheat if you do not stop it.

Why Does It Happen?

It’s most likely for the error “Encoding Overloaded” to show up if you have recently adjusted the video settings in OBS. You need to have a highly configured PC in order to utilize the maximum videos on OBS. Otherwise, you’ll face lags in your streams and eventually, your stream will freeze due to overload.

For example:- Increasing the video resolution of your game will put a lot of strain on your CPU which would eventually result in overheating. In order to process all the pixels, your CPU will have to work harder to encode the video output. Meaning, the more pixels you use, the more strain your CPU will take.

You’ll also start seeing “Encoding Overloaded” errors or something like that if your PC does not have the hardware required to encode the video output. If this is the case, then you’ll face quality issues with your video and audio as well. Therefore, it’s best to check if you have the required specs on your PC that can support OBS software. Well, even with a fairly low-end PC, you can still produce a decent quality stream, you’ll have to adjust the settings accordingly.

How To Fix Encoding Overloaded Error?

Do not panic if you suddenly start seeing “Encoding Overlapped” error on your screen while streaming your gameplay. The error simply indicates that your CPU does not have enough processing power to produce the video output. So, in order to fix this issue, you will have to perform the following solutions.

In most of the situations, people start off streaming their gameplay without reviewing the settings they’ve set in OBS. The program offers a wide range of customization settings which you may find overwhelming if you’re using it for the first time. So, it’ll take some time to get familiar with all the options and settings in the program.

You will need to change a few parameters and tune down some parameters by going into the settings in OBS in order to get rid of the “Encoding Overloaded” error. Adjusting a few settings here and there will most likely solve the problem and you should be able to start streaming without any issues. However, if the problem still persists, then move on to the next method.

Encoding your screen is probably the most stressful tasks for any CPU to process, and it’s the same thing here. If you’re set the resolution to the highest, let’s say 1080p resolution, then it’ll put twice the load since your CPU has to process double the amount of pixels created on 720p resolution. Therefore, it’s not recommended to go beyond the settings your CPU can handle to avoid overheating.

You shouldn’t be seeing the error after performing the above-mentioned steps. In case you still the same error, then proceed with the final method mentioned below.

In case you don’t know, frame rate simply refers to the number of frames your CPU is capturing every second from your gameplay video. Go ahead into the settings and see if you’ve set the frame rates to its maximum limit. Otherwise, the problem wouldn’t show up in the first place. Setting a higher frame rate (60 frames per second) would require a powerful GPU. If you’re experiencing periodic lags and stutters, then it indicates that your GPU is unable the process the frames of the game itself and the video you’re streaming.

Go ahead with the following steps and reduce the frame rate number in your OBS software to stop seeing the Encoding Overloaded warning.

Start steaming again after applying all the above-mentioned settings in the  OBS program and you’ll no longer see the “Encoding overloaded” warning message on your screen.

Hopefully, you were able to solve the “Encoding Overloaded” issue by following the above-mentioned methods. If the problem still doesn’t go away, then you’d have to consider upgrading your CPU to continue streaming. Go ahead and let us know in the comments if you’ve found the article helpful.

How to Fix Steam Says Game is Running issue in 2022

How to Fix Pending Transaction on Steam Easily in 2022

How to Fix Twitch Clips Not Working Issue in 2022

How to Turn Your Knowledge into Recurring Revenue

How to Fix Steam Says Game is Running issue in 2022

How To Mute Discord On Obs [Best Guide]